Paverpol International is a company with an international image. Paverpol and all related products are available in over 40 countries.

Brigitte and Edwin Broekmeijer ánd Hans and Carin Houmes are the new owners of Paverpol International. At the start of 2019 they took over the company from Daaf Schipper.

Paverpol International has been an established name for years worldwide. This is mainly due to Jossy and Jan de Roode, who started the company in the nineties of the previous century. Subsequently Daaf was active for five years. Now it's Brigitte, Edwin, Hans and Carin's turn. They are enthusiastically working on expanding the company further. One of the first changes that has been made, was the move to new busines premises in Kapelle. Investments were also made in a more efficient order and invoicing process, faster logistics processing and a new website. Next on the agenda is the introduction of new products. 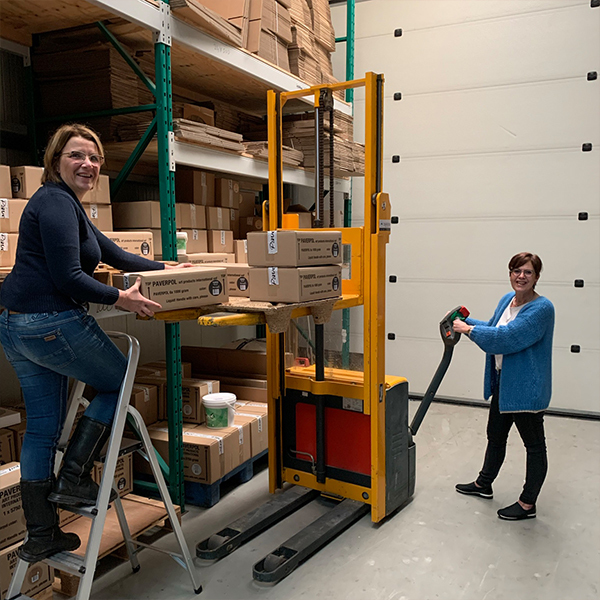 “It is really special that thousands of people worldwide work with our products. If you really let that land, it gives you an incredibly satisfied feeling. All Paverpol buckets worldwide come from Kapelle and literally pass through our hands.”

You can find Paverpol International at the Ambachtsweg in Kapelle. From here, the products are shipped to no fewer than 47 countries. Paverpol is a unique textile hardener, a Dutch DIY product with a history that goes back 25 years. The secret behind this success? According to Brigitte Broekmeijer and Carin Houmes, it is the endless possibilities to shape creativity. “The basic product is the textile hardener Paverpol. If you combine this with our other products and your own creativity, then a lot is possible. You can create your own sculptures, for indoor or outdoor use, as well as wall decorations, dishes and jewelry. It is even used for carnival floats. Actually, an idea is added every day. And the best thing: anyone can do it! ”

International creativity
Sometimes professional artists choose Paverpol, but often amateur artists and hobbyists too. “We see all kinds of artworks passing by on Facebook, Pinterest and Instagram every day. You sometimes immediately recognize the nationality in this. In Japan people are housed in small houses. They mainly make small works. Whilst Canadian Paverpol enthusiasts like to go big with sturdy birds for their gardens. Because yes, that also makes Paverpol so much fun. It can stand outside: in the icy Canadian winters, but also in the sweltering heat of New Zealand and Australia.”

Renewal
Although Paverpol has been around for a quarter of a century and has a crowd of loyal users, Carin and Brigitte know that innovation and visibility are important points of attention. “We recently renewed the logo. We also put a lot of energy into optimizing online visibility. We have also completely renewed the webshop. We now work from a business premises in Kapelle, but are looking for something bigger. We also want to give workshops. And we are fully engaged in product development. For example, we will soon be introducing our own paint collection.” 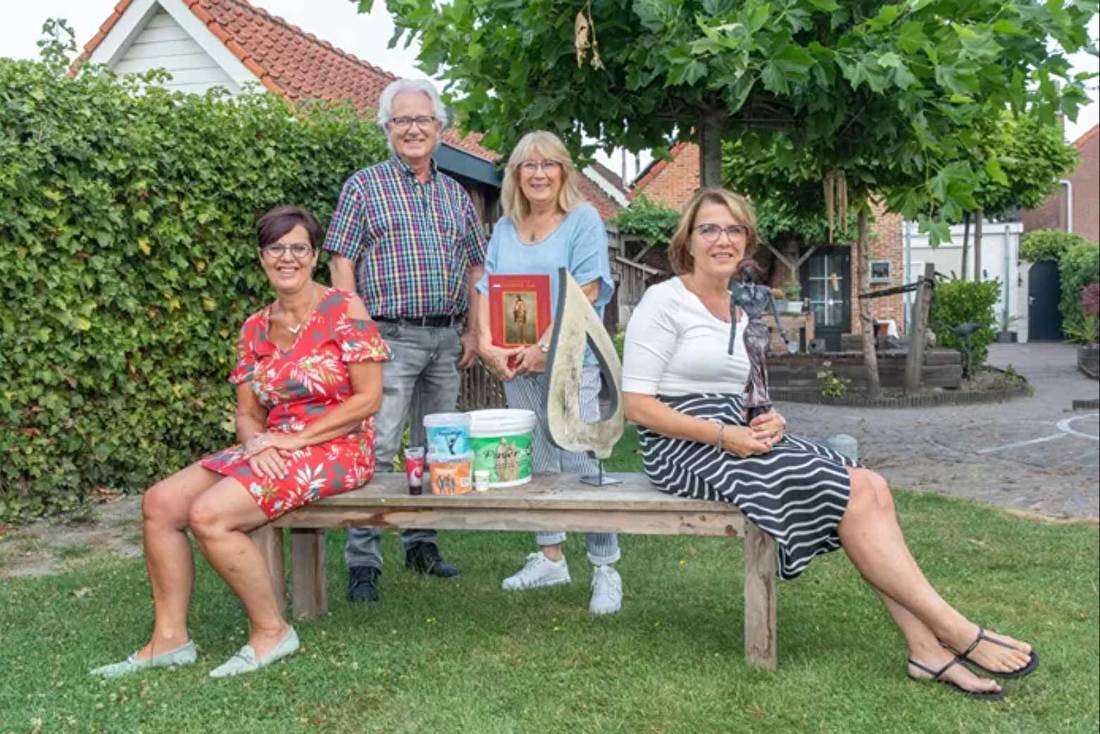 ▲The new and old owners of Paverpol International. In the foreground Carin Houmes and Brigitte Broekmeijer with a statue of Paverpol in her hand. In the background the founders Jan and Jossy de Roode. © Marcelle Davidse

From flower pot to float: Paverpol has conquered the world from Zeeland

KAPELLE - Perhaps it has caught the eye. A flower pot in a garden, made from an old pair of jeans. Or a statue of textile. Almost certainly made with Paverpol. A hobby material that conquered the world from Burgh-Haamstede 25 years ago.

“I discovered Paverpol by accident at the Volksuniversiteit in Middelburg. Someone was working on it and I wanted to experiment with it ”, says Jossy de Roode from Burgh-Haamstede. She drove to Bergen op Zoom, to Paul Versijp, to get a pot. He is the inventor of this polymer that can not only harden textiles but also make them weather resistant.

De Roode was soon completely addicted to the material. Experimented and invented all kinds of applications, such as statues. Because once hardened, it can be painted well. In consultation with the inventor, De Roode and her husband started selling Paverpol. That was in 1995. “We had a company in product promotion at the time, so it was familiar territory for us. I sent some pictures to magazines in the hope that someone would pick it up. And they all did, ”says Jossy de Roode. The effect was huge and unexpected. "We received as many as 200 phone calls a day." That could only lead to one conclusion: Paverpol had potential.

Workshops were organized, soon followed by training courses for instructors. The Zuidhoek in Zierikzee was called in for the logistics part and the company grew rapidly. Paverpol was hot in the Netherlands. After a first visit to Dallas, the world's largest international fair for hobby materials, the international market was also conquered. The company has since grown into a company with customers in 47 different countries. “Our first customer came from Denmark”, says Jan de Roode. "Now we are all over Europe, but also in Australia, Canada, America, Mexico, Suriname and Russia, for example."

After 25 years, Paverpol is no longer only used to make garden ornaments or statues. The liquid substance has many more possibilities. It is used in paintings, popular with carnival float builders and living statues for their costumes. “And an artist has even used it to turn fluff from tumble dryers into acoustic wall panels,” says Carin Houmes. For a year now she has been an owner of Paverpol International, together with her husband Hans and friends Brigitte and Edwin Broekmeijer.

In the past year, a lot of energy has been put into optimizing visibility on the internet and the webshop has been set up. Distribution is again in our own hands, now from a business premises in Kapelle. “But we are looking for something bigger, because we also want to give workshops”, says Hans Houmes. “And we are fully engaged in product development. For example, we would like to introduce our own paint. And if possible, we would like to go back to exhibitions. ” Founders Jossy and Jan de Roode are still involved in the company. They provide advice, train course leaders and maintain international contacts.